Suggest This Page To A Friend! 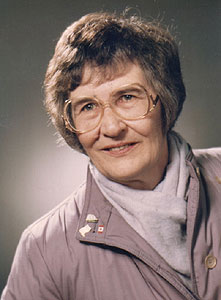 February 11th 2006, I received a phone call from Tom Gorman, Christine Gorman's son. Christine was one of the Island Register's closest friends, and one of its most frequent contributors. Christine fought a valiant battle with cancer, and went to her rest Thursday night. There have been many long time users of the Island Register who have passed away through the years, but none whose loss will be felt as deeply as this. To Tom and Elaine of Fall River, Anne and Alex, and to Christine and Dannie, and to their children, I wish to express my condolences. Christine will truly be missed in the greatest way by everyone whose lives she touched.

GORMAN, Christine MacPherson - Amherst, in her 75th year passed away suddenly in the VG Site, QEII, on February 9, 2006. Born in Toronto, she was a daughter of Christine and Hugh Ross Rutherford. She was predeceased by her husband, Charles Barrett Gorman, and his family. Sadly missed by Christine and Dannie MacKinnon, Brooklyn, P.E.I.; Tom and Elaine Gorman, Fall River, and Anne and Alex Lorimer, Mississauga, Ont. She is remembered as Grandma Ahoj by Alexander and Christine Sarah MacKinnon, James and Peter Gorman, Philip and Matthew Lorimer. She is survived by her brother, John Rutherford, Ottawa, and sister, Jane Steed, Calgary, and their families. The family will receive visitors in Furlong's Funeral Home Ltd. on Sunday 1-3:30 p.m. followed by a private memorial service. Burial will take place in St. Mary's parish cemetery, Indian River, P.E.I., later in the spring. In lieu of flowers, memorial donations made to National Ovarian Cancer Association, 101-145 Front St. East, Toronto, ON M5A 1E3 or Canadian Engineering Memorial Foundation, P.O. Box 370, Renfrew, ON K7V 4A6, would be appreciated.

Note: The photo above was received April 7, 2006 from Christine's son, Tom. Tom tells me, " In the early 1990's after the Russians left Czechoslovakia, there was a Canadian charitable organization that helped send volunteers over to help teach English to adults. Mom was one of those volunteers who spent a year living and teaching over there. This scanned photo (one of our favourites) was taken by one of her students during that time."

Christine's daughter, Anne Gorman Lorimer - aa.lorimer@sympatico.ca is now online and has offered to help anyone she can with questions about her mother's files!

© Dave Hunter and The Island Register: HTML and Graphics

[ Return to Fenceviewers and Lists Page!] | [Return to Main Page! ]