This page will provide you with notes on P.E.I. Heritage, Cultural and Genealogical Events, etc. If you have anything that you feel should be listed here, please email

The P.E.I. Museum and Heritage Foundation held its Annual Awards Presentation, Wednesday, February 17th, 1998. The ceremony and banquet were held this year at the Confederation Centre of the arts. Lieutenant Governor Gilbert Clements Prestented awards to winners in the following categories:

Award of Honour, presented to the Leard family for three generations of Heritage work and Research. Award accepted by Boyd Leard.

Waldron Leard, was the winner of the "Mary Cornfoot Brehaut" award for genealogy, which was accepted by his daughter, Susan Leard, and Canon Robert C. Tuck was the recipient of the Irene Rogers award for outstanding contributions in the field of architecture.

On behalf of the Island Register, I would like to congratulate all of this year's winners. It is because of people like them that this small Island cherishes its heritage.

The P.E.I. Museum and Heritage Foundation held its Annual Awards Presentation, Tuesday, February 17th, 1998. The occasion was celebrated with a reception held at the Eptek Centre in Summerside, followed by a dinner at the Loyalist Country Inn, also in Summerside. The dinner is one of Prince Edward Island's Heritage Week Festivities, and serves to honour those who have gone beyond the norm to promote the Island's Heritage.

Lieutenant-Governor of Prince Edward Island, the Hon. Gilbert Clements made the following presentations to award recipients:

Dr. Edward (Sandy) Ives, of the University of Maine, a distinguished Folklorist, who, in 1957 researched the life and songs of Larry Gorman, a lumberman from P.E.I., and author of three works about the folk songs of Prince Edward Island, received the Foundation's "Award of Honour" for his contributions to the Island history and folklore over the past 40 years.

The "Mary Cornfoot Brehaut Award" which is presented for outstanding achievement in the field of genealogy, was presented to David Hunter, of Orwell Cove for his presentation of Island genealogy via his Internet Web Page, "The Island Register".

The "Irene Rogers Award" presented for outstanding contribution to architectural preservation was presented to Joachim Da Fonseca, for his work on the Farmer's Bank in Rustico. 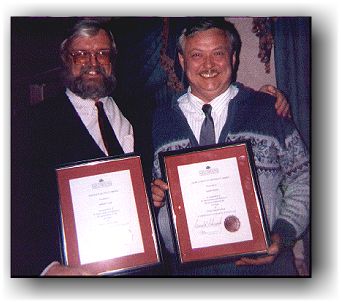 Congratulations, also, to Mr. Frank Pigot, recently retired Reference Librarian from U.P.E.I., who has been responsible for the P.E.I. Collection and the University's Archives. He was honoured in a special ceremony at Beaconsfield, Monday, February 16th with the "Meritorious Achievement Award", for his work in the past decades to build and organize the collection.

Congratulations to all the winners from "The Island Register", and thanks for your efforts to preserve the Island's heritage!

Roger James Dyment (1948 - 1997)
It is reported in the September 1997 issue of the PEIGS newsletter that Roger, passed away at Groves Memorial Community Hospital in Fergus, Ontario, on Saturday, 31 May 1997, age 49 years. Roger was born in Victoria West, P.E.I., the son of Lloyd and Doris (Ladner) Dyment. He was a graduate of McMaster University in Hamilton, Ontario. He was a teacher, and later employed as a clerk at the Toronto City Administration. Roger had a love of genealogy and computers. He is survived by his wife, Lucy (Ladham), son Ian, daughter-in-law Tanya, daughter Michele, brothers Gerald and Dave, and sisters Ada-Mae and Arlene. Roger was a friend of the Register and known to computer genealogists across Canada. He will be sorely missed. The Island Register's and my deepest sympathy go to Roger's Family and friends.

Roger's Page is still on-line (September 19, 1997) and may be referenced by clicking on the link.

The Life and Times of Michel Haché-Gallant
An excellent example of an Acadian History by John Gallant. Very Interesting! See Family History page for a downloadable genealogy of Michel's descendants by John!